Ollantaytambo is only about 2 hour drive from Cusco. We went there only once during our 1 month stay in Cusco and so far it’s one of the brightest memories I have from South America.

When Spanish arrived to South America and concurred poor great Incas, they put a lot of effort to make sure the local Inca gods and beliefs were replaced by all the Christian saints along with Jesus. But instead of wiping off and introducing the new, Spanish decided to attach Christian belief to everything ‘holy’ that Incas already had.

That’s why it’s quite common to see a Catholic church on the top of Inca ruins, the icons in churches portray Quechua children as angels. In almost every church in Peru (and the rest of South America) you see a pretty bloody plastic statue of crucified Jesus, and his dead body somewhere nearby, so people don’t forget that he died for their Inca sins. Overall, Christianity is very over-exaggerated and very different from what we know back in Europe. As well as celebrations. Of course, for Christmas they cut the pig, but apart from that, Peruvians have dozens of different festivals and ‘holy’ days for which they dress up as crazy, get drunk, and insinuate who knows what episodes from Bible, walk around towns with giant candles or simply dance all day and night long.

So when we asked what interesting happens nearby at the hotel where we worked, we were suggested to go to Ollantaytambo for their patrons day. I don’t remember who is the patron or what day that was, but the costumes and celebration was something completely new to me. 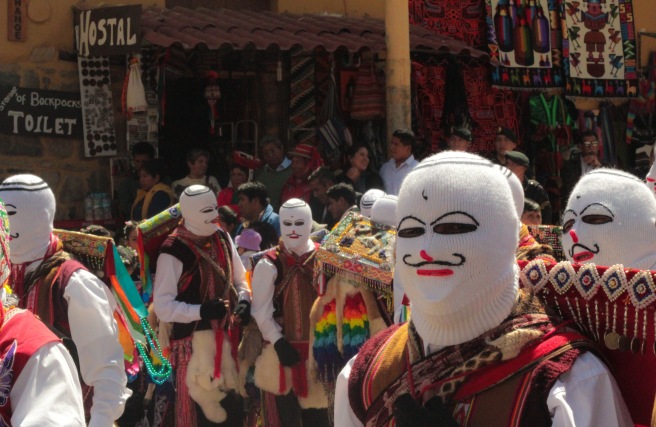